It’s all over facebook… GOGI GUI… I’ve been hearing rumors about this new Korean Restaurant in the city.  That’s why last Friday (August 29), me and my two friends decided to try Gogi Gui.  I was told that a lot of people usually go there and that you ‘d have to wait for a while.  I arrived at 6:30PM, there were already a lot of people waiting outside.

I was even more surprised when the man assigned to entertain new guests told me that our group is the 14th group waiting to be served. Wahhhhhhh! Crazy…

The restaurant has only eight (8) tables and most tables can only accommodate a maximum of four people.  However, I noticed that some people were too eager to eat and be together with their friends, they didn’t mind sitting too close with each other.  The largest group in one table was composed of six people.  How sweet of them… 😛

I didn’t mind waiting for our turn since my friends hadn’t arrived yet.  While waiting, more and more people came.  If I remember correctly, after our group there were at least nine (9) more groups came and asked the staff to include them in his list.  The good thing about this restaurant is that they don’t accept reservation. It’s a first come first served basis. However, they defeated this purpose when the owner told her staff to have one table ready for reservation.  That was for her and her companions.  She arrived later than us but of course since she is the owner she can do anything with her restaurant and that includes not following her own rule. 😉

Anyway, when my friends arrived we still had to wait a little longer.  About almost two (2) hours. 😉  We didn’t mind waiting but what pissed us was this group of people who came in early but took their time to eat. Yeah, some people are really insensitive.  Despite the number of people waiting outside, they actually didn’t mind us at all.  They kept eating to their satisfaction. huh! I hope that you wouldn’t encounter people like them when you eat there. 😛

When it was finally our turn, we were entertained by well-trained staff.  The one who took our order explained to us the menu.  Here’s the menu:

There were three of us but we will be served one set of meat at a time. One set includes pork, chicken and beef.  You will also be given a ramen of your choice for free (spicy or not).  That night, the additional menus are not available.  And… The price of all their pepsi products is only 25 pesos and it is bottomless. 😉 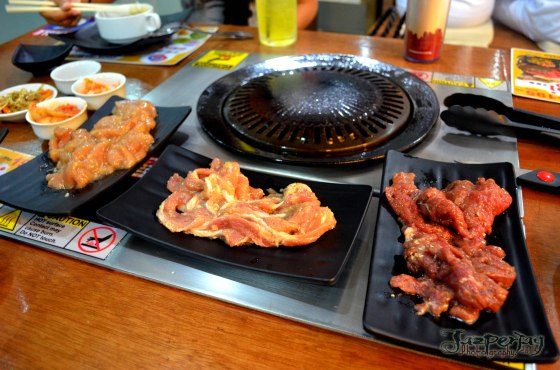 This is how one set of meat looks like.  They will give you another set after you have cooked everything. Just call the waiter and they’d serve the next set as fast as they could. 😉 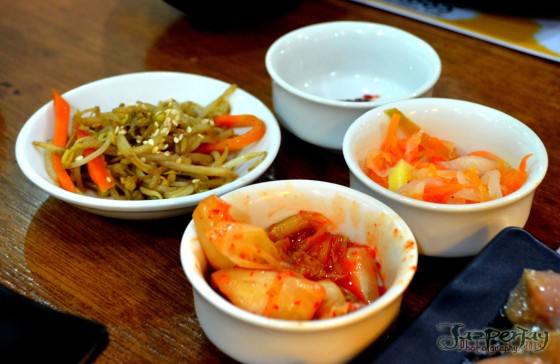 Like any other Korean Restaurants they also have their free and unlimited side dishes.  These were  their side dishes that night.  Kimchi, Korean Chili Paste, Bean Sprouts and i forgot the last one. hahaha

This is their free Ramen (spicy).

The cooking part is the most fun experience of all.  I just love the idea of cooking for your friends.  I am not a good cook but it’s one of my frustrations to really cook well.  That’s why that night, I was the one holding the tong and doing the “barbecuing”… hahaha

This is how the restaurant looks like from the inside.  See that group in the middle? Their table is good for four but there are six of them. They just love being together. The table next to them is a group of five. 🙂 This is a small restaurant but the experience is something you wouldn’t find in other restaurants.  The time waiting that we spent here was all worth it. We went home with full tummies.

So, what are you waiting for? Visit them at 8-A Mabini Commercial Complex, Corner Mabini and V. Mapa Streets. And if you are not familiar with the name of the streets, then go to Yellow House. You can just walk from there. 😉